I know every dog owner out there uses the following phrase to describe their beloved pooch on a regular basis: It’s like ‘seriously, it’s as if he’s human.. he’s soooo like us’…. Sure, roll your eyes, but I am proud (and yet somewhat embarrassed) to say that I am one of such dog owners, and on more than once occasion, have doubted his ‘canine-ity’.

My dog’s name is Edward and just last September he turned the ripe age of 10 (which apparently is not 70 human years, but rather 53…. I had to Google it).

Now don’t get me wrong, Ed is most certainly a dog.. the other day I caught him staring at the wall for a good 45 minutes, before licking it and walking away with a satisfied sense of completion. He licks his (phantom) balls and when he thinks I am not looking, will have a nibble at his own sh*t.

He also appears to have some form of Obsessive Compulsive Disorder, as he is unable to jump on the bed or sofa unless he starts from the carpet; will first put his paws back into the pool before returning a ball during a game of fetch (if said ball was thrown outside the water); and needs to visit every room with his bone or doggy treat, before eating it (it’s as if he is showing the house ‘look what I got’). All behaviors we first assumed to be random acts, but after various trials  attributed them to a doggy form of OCD rather than our dog’s own stupidity.

But quite often over the years he has surprised me with a seemingly clear emotional intelligence… I use the word ’emotional’ intelligence, as he has run into too many glass doors to refer to him as a ‘smart’ dog.

But a dog’s gentle character and ‘human’ like traits, in my opinion, are shown:

– When they gently place their head in your lap, after finding you squatting on the kitchen floor, clutching a tub of peanut butter, crying over yet another break up (and not trying to lick the spoon)

– When they sit next to you/scratch the bathroom door during a rather challenging bowel movement (yep.. toilet humor has made it’s way into the blog) as if to offer you a silent stand of support and showing you that ‘you can do this, buddy’

– When they go and give your crying child a kiss, when you can’t get to them straight away, you know.. to help out.

– and last but not least, when they look absolutely devastated that they have disappointed you by vomiting on the carpet and will do everything in their power to get back into your good books

So from one dog lover to another…. hug your big ball of love and slobber today… because those goofy bastards sure do deserve it 🙂 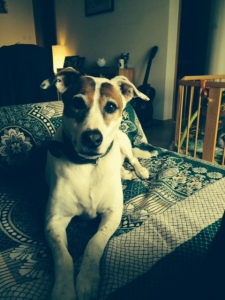