I’ve been an expat most of my life: as the child, as the working partner, as the spouse and now as the new house mommy. One thing that seemed consistent, no matter where we lived, was the dishing out and immediate labeling of various stereotypes. A trade, so ingrained, we are all guilty of doing it more often than we’d like to admit!

Some people do fit the profile dead on, stereotypes after all are based on some truths, but unfortunately many people tend to be ‘mislabeled’ and pushed aside because of someone else’ perceived idea of their story.

I’m blessed to have a bit of a mixing-pot of friends which has led to some fun conversations about what people have said behind our backs (or in some cases straight to our faces). I’d like to share some of the stereotypes that get slapped on some of us ‘expat wives’ here in Hong Kong because of our appearance/situation and perhaps a different truth behind each one.

The stereotype: People see her pushing her stroller, having a coffee with friends, and browsing the book store. The stereotype pretty much labels her as someone who stays at home, has a frequent flyer card at Starbucks, bosses around local wait staff and has nothing better to do but meet up with friends to complain about her life to kill time until the husbands come home.

A different truth perhaps: This ‘soccer mom’ works from home, wears sneakers because her kid is just too darn fast these days, doesn’t own a single high end piece of clothing, is one big doormat who wouldn’t dream to yell at a server for fear they’ll spit in her food and spends time having a coffee with friends because it’s the only social interaction she’ll get that day because she can’t currently work outside due to a lack of available daycare. She loves her life and knows darn well how blessed she is, but doesn’t mind the occasional vent on a bad day.

The stereotype: People see her with her expat husband and immediately think she must have met him out in the bars where she worked as an exotic dancer/cleaner and has now married him for his money just to escape the poverty hit life she probably had before. She speaks in her own language to friends and will hit on your husband the first chance she gets.

A different truth perhaps: They met whilst he was working overseas as they were colleagues at the same firm. She admired his passion for life and decided to follow his career which resulted in her staying at home to raise their children. She speaks her own language with her friends, just like the rest of the expats do when feeling a bit homesick, and although she is darn exotic and sexy, she has better things to do than to spend her time hitting on your fat, balding husband.

The stereotype: When she is in a larger group she won’t say much as she prepares the snacks she made for the social gathering and takes care of everyone around her. People might view her as a simple wall flower with not much to say and will avoid striking up a conversation for fear they’ll be stuck talking about pottery classes or having to explain to her where any countries are.

A different truth perhaps: This little ‘wall flower’ will kick your ass if you cross her or anyone she loves. She doesn’t talk much in a big group as she quite enjoys watching people and being in the moment rather than taking to the stage. She loves talking about politics, religion and has never taken a pottery class in her life. She probably knows more about certain topics than you do but doesn’t feel the need to prove that to anyone.

The stereotype: She lets her children run around and bug people as she quietly sips a cup of green tea without a care in the world. She has her two-year old signed up for calculus, piano lessons, advanced French and floor gymnastics. She is ruthless, pushy and competitive and will see all non-Asian moms as hippies who let their kids run wild.

A different truth perhaps: This ‘Asian mom’ studied in London, and although she has taken up some of the traditional ways of raising her child, she enjoys putting her own spin on things. She sips that cup of tea to give herself five minutes alone to relax and forces herself not intervene when the man who slammed the door in her face a mere five minutes ago gets annoyed that her child is running past his table because she is being ‘inconsiderate’. She would like her child to have the best opportunities in life and may have signed him up for a swimming class, but rest assured he is in bed on time and doesn’t get forced to play the piano as she slaps his hands with a ruler. She needs to be pushy sometimes as she lives in a culture where competition is high in the educational system, but she has a heart of gold.

The stereotype: She has the know on all local restaurants, shops and customs and speaks the language even when it’s not needed. She has completely immersed herself into this new culture and is condescending towards anyone who doesn’t know what the term ‘pu tong hua’ means. She is a know-it-all who will give you her two cents whether you have asked for it or not

A different truth perhaps: This expat enjoys the adventures of a new culture and gets a kick out of learning a new local phrase for the week. Her intentions of sharing her local knowledge merely come from a place to give some of the lovely experiences she has had to others. She doesn’t care less if someone doesn’t have the same enthusiasm over a game of Mahjong and just wants to soak up every second of her life overseas before returning back home.

The stereotype: She always looks well-groomed, carries around her Gucci purse as she spends her time at the salon and spa. She is often seen on the arm of her rich husband and is gawked at my all men who picture her in her Guess bikini as she stupidly sips cocktails with them on the beach.

A different truth perhaps: She likes to take pride in how she looks as it boosts her confidence; and she doesn’t mind getting up 40 minutes earlier to make the effort to do so. Her fancy bag is probably a knock off she found at the markets, but she likes the style and look of it. There are only so many manicures a person can have before your nails get filed off, so you probably just happened to have catch her on her monthly spa visit. She feels immensely proud to be at the arm of her successful husband as he worked his way up from the ground whilst she supported him fully from the sidelines. She can’t help it that other men gawk at her, but that won’t stop her from looking good as she does this for herself. She is beautiful from the inside as well as out and makes a great friend to anyone who can get passed their own low self esteem to talk to her.

The idea of this post is to exaggerate some of the common stereotypes I have witnessed for the sake of taking it all with a grain of salt and humor, but mainly for the rest of us to take a second a look at someone before we pass judgement (or at least to have the decency to keep some of our opinions to ourselves). 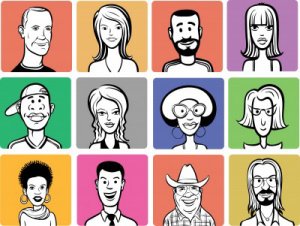